Last week, at the pinnacle of the viral #metoo movement, I shared an Ebony article on Facebook. It was a passionately-worded piece wagging its finger at all of the #metoo hype, as if to say, “Hey! We’ve been saying this for a decade and the movement was started by a Black woman!” While the article did feel a bit ragey, with its give-credit-where-credit’s-due feel, it highlighted several things:

I even wrote a disclaimer on my article-share, warning my friends and followers to not be turned off by the title and tone. I urged my friends to read it. Read it becaus 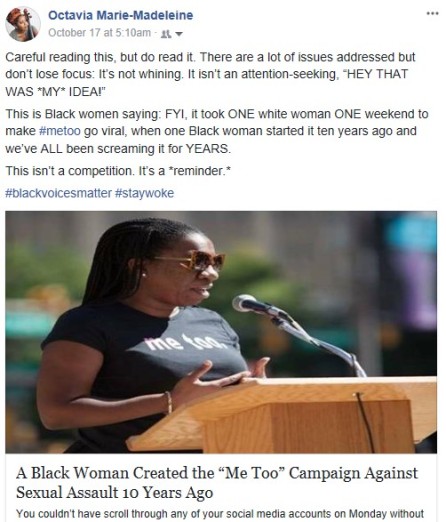 e hey, this isn’t new. This is all races, all sexes, all genders. And it’s a whole lot easier to ignore abused people – especially when we’re shouting from the margins.

Well, I had a friend. That one (sometimes three) friend(s), that did have to say something about – by my own words – “playing the Race Card.”

He expressed his thought that justice is great, why bring race into it? Just be grateful this is getting attention!

I saw red. I saw flames. If I had laser eyes to shoot at his fingers on the keyboard via the inter webs, I would have aimed and fired. We went back and forth a little, but then he did something amazing that I never expected. He took it to the DM.

He asked me to explain how we missed each other, why his challenge to my article-share insulted me, and how he can be a better ally.

Yeah. He asked how he could serve me.

And by the time we exchanged stories, we were both in tears.

He asked …how he could be a better ally.

This is my DM response to him, (some parts edited for this blog and names removed), and it’s   something that all well-intentioned white people should read before they roll their eyes at yet another angry Black woman that makes everything about race and gender:

[TLDR Version: Privilege is real. We live in a constant state of gender and race humiliation. It happened to me, too. Believe us. Whether its racism or sexism, believe us.]

The first time I ever saw white privileged was when I was going through my divorce. Yeah. I know it sounds weird. My first time. But when you’re Black in America you only see the negative attitudes towards your own race and not the actual privilege of being white. That’s not our side of the story. When he and I decided to split, I was the one that was depressed and miserable in the far burbs so I was happy to move.

But I had spent the majority of our marriage as a full-time mom/student with part time gigs. I didn’t have a resume, savings or a sustaining job. Every day while I was still home with the kids, he would come home and say: did you get a job yet? How many applications? Any interviews? How about an apartment? When are you leaving? The pressure was maddening. I wanted to punch him and throw up and run away crying all at once. Every. Day. I felt unwanted and lazy and rejected.

He’s never had to worry that someone would look at him and think “a man can’t do this” or “a dad can’t do this.” That is privilege. But people always think a woman can’t do this or a mom isn’t as committed as a childless person. These are things I choke on daily.

He had no idea how difficult it can be to get a job especially when you’re not a white man.

You aren’t humiliated by others for the color of your skin.
I just got a lotus tattoo for my birthday. Beauty and blessings springing forth from the mud. X— made some mud comments about me in sixth grade. Again, not your reality. Not even on your radar. But it was stinging and humiliating. It made me feel ugly and less than and unlike and unaccepted and rejected and reminded me that I will never be one of you.

My new ink is my peace with that. I know now that I am beautiful and talented and radiantly intimidating. In first grade I had to change for gym class alone because my changing buddy’s mom found out she was undressing with a black girl and didn’t want me around her daughter. And that, too. All the time: Black girl. I hate it when people say, “so this Black person — no offense — was talking…” Why is “Black person” offensive? I’m not sorry I’m Black. Does my Blackness offend you? Why are you apologizing? I am Black! Say it! Black isn’t a bad word. N** is. Black isn’t. Neither is white. Say it. We are our colors and we all deserve to be seen.

With all of that said, it is SO crushing then, when I say to someone, for example, a white significant other, “Babe I had a weird experience today and I really feel like it was racially motived,” and he says, “nahhh I don’t think so. Maybe you did something wrong.” That’s the most devastating thing. When people in the majority point fingers at me and accuse me of playing the race card.

When I experience something and feel sad and violated and discriminated and someone that couldn’t possibly be able to relate blows me off and says they don’t believe me — it’s a terribly crippling feeling. It’s gaslighting. It’s crazymaking.

If I say “this feels racist,” BELIEVE ME. Please. This is my world, not yours. Please believe me that something hurts and it’s not fair. What if we went to the doctor complaining of illness and he doc says, “Mmmnah I don’t think so. Stop whining!”

The last place I worked my coworker rubbed my knee under my dress when the two of us were alone in a conference room. Later he “brushed” past me rubbing his body on my butt. Twice. And then when we were leaving that hospital site, we were alone in an elevator and he stroked my face. Twice. Because I looked tired. I wanted to slit his throat and set myself on fire.

When I reported him to HR, the woman said,” nahhh I don’t think so. That doesn’t sound like X—. Maybe he meant…”

By this time I was numb and tuned her out. Here’s a woman WHOSE JOB IT IS TO TAKE MY REPORT and she didn’t believe my story. #metoo

This happened to me! And she didn’t care. Now, sidebar, there is another dynamic between women where unsolicited sexual advances by an attractive man are not crimes but compliments. Part of me wonders if she was jealous that X— was flirting with me and not her?? Who knows. I don’t care. The point is that she didn’t believe my experience. But she’s not me. Don’t tell me my truth is not true. Now this part is for you and your brilliant girls: when they come to you, and they will, and they say, “Papa someone made me feel weird today,” BELIEVE THEM.

Don’t ask what or if they did anything to deserve it. Don’t tell them “nnnnnno I don’t think it’s like that. Why are you forcing some issue into this?“
Don’t assume they’re just girls making things up or being dramatic or being emotional or too sensitive or being [insert negative idea about women here].

And then… do something.

One thought on “Believe Me, Too” 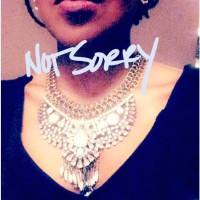 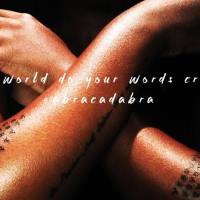